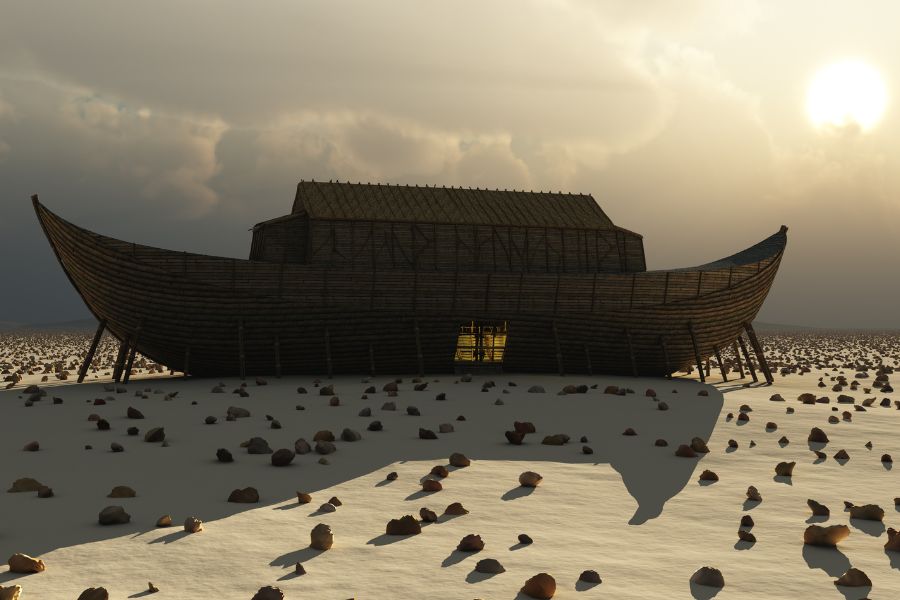 In the Genesis account, God calls Noah: he is dissatisfied with the conduct of men on earth. He judges them as cruel, wicked and perverse.

Among men, God chooses Noah for his integrity and devotion to God. After thinking for a while about totally destroying his creation, he changed his mind and wanted to spare Noah and his family, as well as the animals of the earth and the sky. , from the destruction that God intended to wreak upon the earth.

He then orders Noah to build an ark with his family, for which he gives very specific instructions on how to build it.

What instructions does God give for building Noah’s ark?

The size and structure of Noah’s ark

According to Genesis, God is very precise in his instructions: dimensions, the wood used, waterproofing of the boat, and structure of the ark – God’s orders are clear. Provides details of the height, width and length of the shelter that will contain its creation. The ark must have a roof and side entrance and must have three floors.

The inhabitants of Noah’s ark

In his instructions, God is also very specific about who will be lucky enough to escape the flood in the ark:
Noah must enter with his entire family: he and his wife, his three children Shem, Ham and Japheth accompanied by their wives. He must also collect the animal creation.

Noah is to bring seven pairs of animals considered pure and only one pair of unclean animals into the ark. However, he must not forget to take even the smallest of God’s creations.

Finally, he must provide food for each of them.

The story of Noah’s Ark is fascinating. In fact, there are more than six hundred ancient myths in the history of mankind describing a flood that drowned an antediluvian world.

Among the most frequently asked questions about the flood and Noah’s ark that allowed us to face it, there is the one about the real existence of the ark and its location. Finally, the very existence of the flood is doubtful enough that the scientific community has examined it across various disciplines.

Where is Noah’s Ark located today?

Many scientists, archaeologists and researchers have set out on the trail of Noah’s Ark. The texts of Genesis state that the ark landed on the Ararat mountains. The Ararat Mountains are extinct volcanoes located on the border between Armenia and Turkey.

These places are the focus of numerous types of research by scientists looking for evidence of the existence of Noah’s Ark. In particular, it is the site of Durupinar, 30 kilometres south of the Ararat Mountains, which is the focus of most of the research and questions. Nothing has been proven yet, but according to researcher Andrew Jones and Dr Fethi Ahmet Yüksel, senior scientist at Istanbul University’s Department of Applied Geophysics, 3D scans of the site show parallel and angular structures 8 to 20 feet deep.

These data are disputed by the scientific community, which believes that they are natural geological formations.

If you are really passionate about Noah’s Ark check out this Noah’s ark print.

Some reconstructions of Noah’s Ark

In the Netherlands, there is a reconstruction of Noah’s Ark. Johan Huibers, a Protestant millionaire who started the project, turned it into a museum about the Bible. This Noah’s Ark was built on a river and can be moved. The millionaire’s plan is to exhibit it in different cities so that as many visitors as possible can access it.

More controversial is the creationist project in Kentucky, USA. This replica of Noah’s Ark was built on the land. It contains reconstructions of biblical scenes from Genesis and numerous representations of pairs of animals, including dinosaurs.

The episode of Noah’s Ark in Genesis is one of those extraordinary stories from the Bible that have a place in our collective imagination and in the general culture of our civilizations.